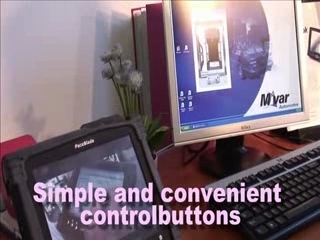 I visited Mivar Automotive on Autovak RAI 2007 and had a chat with Peter Odding. They are going to introduce their software for car collection on a tablet pc. The EasyBook of PaceBlade (disclosure: paceblade is a subsidiary of Tulip Computers, my employer). So again, this is a nice case. The software is originally developped for a PDA, but customers ask for a larger device (but not too large). And a lot of them want to skip the paperwork when a rented or leased car is inspected after returning.
He thinks a tablet is a great device because it is more robust compared to a PDA. And because it is a real pc it is easy to communicate (wireless) with the backoffice and other software. The camera is very handy when you want to record the damage for your electronic file.
Nice to see that the video of Le Mans Damage Company which I produced was installed on the easybook and shown to customers on the fair. I also saw some photos their which I took at Le Mans.
In this video you can hear Peter Odding talking about the tablet pc and his software. Because it is in Dutch you can find English subtitles on it.