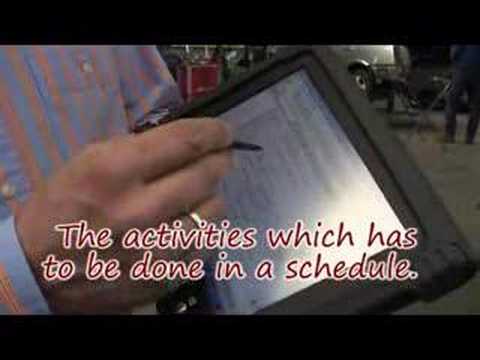 In english
Because some people asked for it I produced an engish version of the Le Mans and PaceBlade video. You can find it in dutch in this posting. Ok, Jack is still talking dutch, but now you can read what he is talking about. I put some titles in english on those screens which are important. I hope you like it.

Two versions
The first video is a Windows Media version which can be run by clicking on the picture. The second video is a DivX version for high definition quality. You need a player for it, which you can download. If you like to see a full screen of the DivX version just rightclick and select Full Screen. Both version will run in your browser without first downloading the video.

The PaceBlade EasyBook
You can see Jack Tensen at work in his company Le Mans Car Damage. He is showing us the use of the EasyBook tablet pc of PaceBlade. All damage is entered in the tablet pc via a wi-fi connection. And you can see that all parts, images, details and specifications are used with the tablet pc. It takes half of the time comparing with paperwork and his calculations are without mistakes.
If you want to see the photo’s I took go to this posting.

Wings around Britain: I will videoblog from a sportsaircraft!